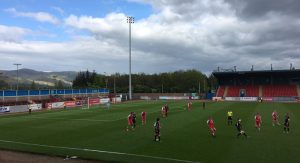 Stirling ended the 2018/19 season with a dull draw against play-off bound Edinburgh City to secure a fifth-place finish in the Ladbrokes League 2 table.

In a game of few chances, there was little to excite the fans on a bright, breezy and chilly afternoon at Forthbank as we followed up recent draws against Annan and Peterhead with another stalemate in a run of just one defeat in our last seven matches.

Binos boss Kevin Rutkiewicz was without Lee Hamilton and Jason Marr while Neil McLaughlin and Max Ashmore were also missing from the squad. City, who face Clyde on Tuesday, were without a number of key players, including injured 38-goal striker Blair Henderson.

Both teams tried to make things happen but the game lacked quality and neither keeper was overly busy in the first half, although Calum Ferrie did well to push a Josh Walker drive round the post and Calum Antell had to be sharp to thwart Darren Smith after he got beyond the defence.

Adam Watson had a good opportunity for the visitors after the interval but his effort was cleared and this had the look of a goalless draw long before the end.

That said, Stirling should have won it with eight minutes left. A good move allowed substitute Peter MacDonald a clear sight of goal but he instead opted to pick out top scorer Smith, who couldn’t apply the finish at the back post.