Everyone at Stirling Albion was deeply saddened to learn that our former goalkeeper Michael Monaghan had passed away at the age of just 56.

Mick was best known in football for his time at Queen’s Park – he also played for Alloa and joined us from Dumbarton in 1994.

Although often back-up to Mark McGeown, Mick was part of the squad that went a club record 27 games unbeaten en route to the Second Division title under Kevin Drinkell in 1995/96 and played a number of games that season.

Our thoughts are with his family and friends at this very difficult time. 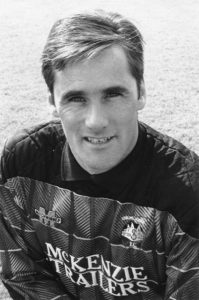