Stirling Albion are pleased to announce that James Creaney has agreed a player/coach role for next season and we also welcome Bill Orr to the club as Head of Performance Analysis.

James began his second spell at Forthbank when he joined us from Annan Athletic last summer. He can also count Ayr United, Alloa, Dumbarton and Stranraer among his former clubs.

The 31-year-old left-back was one of our most consistent players in 2019/20 and scored his first ever senior goal in the 2-0 win at Brechin at the end of February.

Manager Kevin Rutkiewicz said: “James has had his eye on coaching for a long time. I did my UEFA ‘B’ Licence with him when he was in his early 20s and I saw then the potential he had.

“Although young, James will provide vital expertise and modern training techniques that he has rounded at Partick Thistle and, more recently, Hamilton Accies. He will also provide a bridge between the players and myself and to have him as player/coach will be invaluable.

“Joining James and I in the coaching team will again be Kevin Budinauckas as goalkeeping coach and Kenny Crichton as physio.”

Chairman Stuart Brown added: “I’ve got to know James well over a number of years, particularly since his return last season, and I’ve no doubt his determination to succeed as a player will stand him in good stead in his coaching career.

“He may be young but, as Kevin has said, he has considerable practical experience to add to his impressive qualifications and is currently working towards his UEFA ‘A’ Licence. Undoubtedly, James will be equally determined to retain his place in the starting eleven and Kevin has the Board’s backing to add to his coaching team if and when the time is right.”

Bill joins Stirling Albion to add an exciting new dimension that will be of enormous benefit to Kevin in preparing for and delivering targeted training sessions and in providing ‘live’ data on match days.

He was most recently at Queen’s Park, where he carried out a similar role, and previously worked with a number of clubs, fulfilling a variety of scouting, coaching, and performance analysis roles.

As our Performance Analyst, Bill’s role will centre on aiding and increasing the performance levels within the first team via a number of key initiatives such as pre/post and in-game analysis, opposition analysis and the implementation of a GPS Vest monitoring system to help take the club to the next level.

Manager Kevin Rutkiewicz said: “The opportunity to add someone of Bill’s expertise was far too good to ignore. In his role, Bill will provide me with crucial data before, during and after our games and training. It allows the coaching team to expand the areas we cover and will no doubt have a hugely positive impact.”

Chairman Stuart Brown added: “I’m delighted and excited to welcome Bill to the club. He brings a wealth of experience and knowledge to Kevin’s backroom staff and also a limitless supply of enthusiasm and commitment for his work. I’ve no doubt his influence will very quickly pay dividends both on and off the pitch.”

Bill Orr said: “It wasn’t an easy decision to leave Queen’s Park but when the chairman made me aware of the set-up at the club and I chatted to Kevin about the ambition he has for Stirling Albion going forward, I was excited to be part of it and can’t wait to get started! Even without football, there is still much that can be done to prepare players for being fit, equipped and raring to go when there is.” 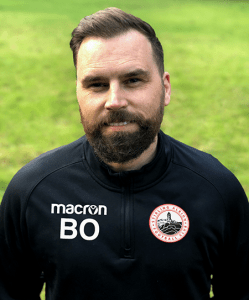