We were saddened to learn today that a Stirling Albion stalwart from the 1960s had passed away.

John McGuinness died yesterday in his home town of Coatbridge at the age of 83. Our thoughts are with his family and friends at this difficult time.

His son, also John, was in touch to let us know the sad news and said his dad was immensely proud of having played for the club – always recalling the many characters and stories from that time with great fondness.

John McGuinness joined Stirling Albion from Albion Rovers during 1960/61, when Danny McLennan was manager, and helped the team win the Division Two title in his first season.

The full-back went on to make more than 250 appearances during his time at Annfield, many of them in the top flight, and his long service was rewarded with a testimonial match against Hibernian in October 1966.

In the summer of that year, John was part of the Stirling Albion squad who made a historic tour to the Far East, when we played two games in Japan plus matches in Greece and Iran en route.

John left the club during season 1967/68 but will always be remembered by fans of a certain age as a big player for SAFC for the best part of a decade. 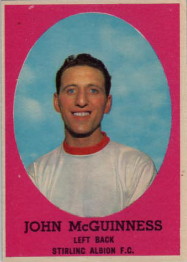