The weeks between our season curtain closing 5-0 win against Edinburgh and the resumption of training seems to have passed in the blink of an eye.

The close season is one of the busiest times for the club as we effectively hit the re-set button for signing new contracts, renewing sponsorships, selling season tickets and finalising the club’s financial year end position.

With the stepping aside of some long-term volunteers, we’ve also had the additional factor of training new faces on systems and processes, all of which has meant our priorities have been focused more inwardly than providing regular updates.

Let us start by thanking you for your ongoing support and patience.

It’s been hugely busy behind the scenes and we’d like to share a summary of the many positive highlights that you may have missed towards the end of the season 21/22 and now.

A huge thank you to those of you who attended our COVID delayed annual dinner.

The event sold out at a packed Golden Lion hotel and we smashed all previous fund-raising target’s records with a little over £19,000 raised after costs.

A particular specific thank you goes to Dron & Dickson, who kindly agreed to pay their sponsorship up front, allowing the club to offset some of the costs incurred at the time of the original booking, back in 2019!

Although we covered this news at the time, we wanted to repeat our thanks to our special group of volunteers at Forthbank.

It’s good to know that the changes we’ve implemented – some smaller, some bigger – were appreciated by those visiting Forthbank.

Improving our match day experience is geared towards attracting and retaining fans from all sections of our community.

Those of you who have had the chance to enjoy our world-famous hospitality at Forthbank or attended the annual dinner may have noticed the work being carried out by a familiar face.

Christine Curtis has extensive knowledge and expertise in the world of Scottish football, having previously supported commercial management activity at Cowdenbeath, Dunfermline and Edinburgh City.

Her role predominantly supports the work of the commercial director and his team, though her passion for supporting youth football, particularly Women’s football, adds a crucial dimension to our aspirations to establish a Women’s team wearing our badge.

If her success continues on the trajectory seen at the beginning of this season, we have undoubtedly found someone who will help the club get closer to its ambitious commercial target of £500,000 in 5 years.

Our new Home Kit by Joma for season 22/23 and 23/24 is now available to buy online! Click here to purchase https://shop.stirlingalbionfc.co.uk/index.php?route=product/product&product_id=327…

If you want to come into the Club Shop and buy the kit in person you can do so on: Tues 5th July 5pm – 7pm, or at any time before a home match.

Pre-season training started on Thursday 9 June and continued throughout June with double sessions on Saturdays and the usual Tuesday / Thursday training slots.

With the Forthbank pitch undergoing major summer maintenance, we have no home friendlies scheduled. 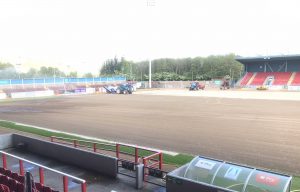 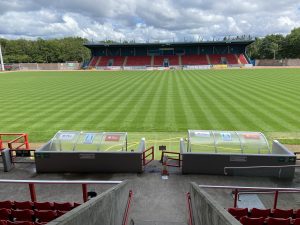 We had one “open door” friendly against Alloa Athletic at Indodrill Stadium on Tuesday 28 June, which resulted in a 4-1 victory for the home-side.

Over the weekend of 2-3 July we played in the NL Cup Tournament.  Two disappointing defeats, against Airdrieonians in the semi-final and Albion Rovers in the 3rd/4th Place Play-off served to provide much thought for Darren Young, the coaching staff and the players.

We are grateful to both Aberdeen and Peterhead FC for working with us to make admission prices as competitive as possible.

Darren is still looking to add to his squad but irrespective of the “no trialists” rule for the Premier Sports Cup, he won’t be signing players just to add to the numbers. Unfortunately, in common with all lower league clubs, we are in the annual “window” during which players seek to hold out for the best deal possible!

We are delighted to confirm that Active Stirling have advised the Stadium Floodlights are scheduled to change over to LED later this year. The existing halogen bulb system dates back to 1993 and has become extremely costly to run and maintain, not to mention unreliable as regular attendees to matches can testify!

Improvements were made to the existing system towards the end of last season, with some incredible work by Ted Christopher.

Unfortunately, however, it is not possible to give any long term guarantees that these improvements will stand the test of time and discussions with our landlord to find an affordable, permanent solution are ongoing.

We are fully supportive of our Tannoy Man Matt Reid’s GoFundMe to purchase a wireless microphone system and the Club Board will liaise with Matt to make our own personal contribution.

More good news! Earlier this year, in partnership with Active Stirling & Stirling Council, the Club made a successful application for Grassroots Funding to replace the ageing, worn-out surface.

A huge thank you to John Daly and Niall Marshall for their invaluable and sizeable input in securing this £100,000 grant. The grant not only goes a long way to meeting the funding needs, but also demonstrates the value of the club and our partners working together to benefit the sporting community in Stirling area.

Given the requirement to go through the Council’s Procurement processes, we await confirmation of when the work will be carried out and the discussions are ongoing regarding the relocation of bookings during the inevitable closedown period.

With the ending of lockdown restrictions, we have been able to revisit the potential reopening of a supporter’s bar within Forthbank Stadium.

The repurposed suite now plays an important role in the financial recovery of Active Stirling, and we have now had two positive discussions, resulting in an agreement in principle that a supporter’s bar can be reopened.

There are still some logistical hurdles to overcome, and we look forward to sharing these with you as they are resolved.

We’re reluctant to suggest a timetable, given the reliance on a third-party support to get things opened up, however, we are optimistic this will be achieved in the first half of the league campaign 22/23.

As previously mentioned in Colin Rowley’s recent Outside the Box, we are very excited to update you on the progress being made with the launch of the Stirling Albion Women’s Team.

Over the past 6 weeks, we have assembled a working group, made up of personnel with the experience of setting up, playing, coaching and managing a women’s team.

We are well underway in the planning of a “launch event” in the form of a football festival celebrating girls and women’s football. Full details of this will follow very soon. This festival will include the Junior Academy Girl’s teams, and we are now seeking players to come forward to represent Stirling Albion Women’s team on the day, for a friendly game of football. If you are interested in playing, volunteering and helping on the day then please email stirlingalbionced@gmail.com

In addition to bringing women’s football to Stirling, the establishment of our Stirling Albion Women’s squad will provide a pathway to the Women’s game for the players of our Junior Academy Girl’s section.

As we progress our recruitment process, we welcome contact from players or coaches with an interest in being considered for a role within the squad.

We have been delighted that Darren Young and his First Team Coaching Staff have shown such faith in the talent coming through the Academy ranks here at Forthbank.  During pre-season ten of our U20 squad have been involved in training and friendly matches.  Ryan Taylor, Darrell Love, Reuben Lamont, Jordan Wyles, Calum Simpson, Sam Metcalfe, Evan Rennie, Kieran Curtis and Greg Harrower have all made a good account of themselves and the Academy is thankful to the First Team for exposing our youth to these invaluable experiences in the senior game.  Furthermore, Will Greenhorn has been called back from his loan spells away from the Club and we are excited to see how often he may feature in first team duties when the season commences.

As with every squad, the summer season has seen its fair share of ‘comings and goings’.   We say goodbye to Robb Dryden, who has served the Academy extremely well but has decided to take on a new challenge in the Lowland League while Sandy Carey, another excellent servant of the club, moves on to The USA to do a soccer scholarship.  Isaac McLean prepares for a year in Norway where we intend to keep an eye on his progress and Callum Galbraith moves on to Dalbeattie Star.  Our U20 squad returns for training on Monday 11th July with the U18s and U16s returning the following week.

SAFC is about much more than kicking a football.  Recent initiatives have seen have seen the Community Department staff attend local school career fairs to chat about the incredibly varied roles needed for a football club to operate and the skills required to work in any of these departments.  Furthermore, the partnerships the Community Department has with local organisations has even seen the Club become a referrer to Start Up Stirling to assist local families who require some initial help with food parcels.

On the pitch, the busy summer season is now upon us with four football camps running at Forthbank and one in Callander.

Forthbank Camps include the standard Summer Football Camp, the “GoFitba” Camp that provides free football and free lunch for targeted families and the Girls Only International Football Development Week scheduled for the end of July.

The latter of these camps will see a week of technical football coaching alongside sports psychology, sports nutrition and strength and conditioning sessions, all delivered by International Coaches and SAFC staff.  On the topic of female footballers, we are delighted to see the growth of our Women’s Recreational 5 aside Football on a Monday evening which has flourished. We are seeing more player’s joining the group all the time and our women have been travelling to take part in friendly matches against other local sides.  All of this on top of the ongoing Walking Football and soccer centres across Stirlingshire means we have a very busy schedule at SAFC.

About the Author: Administrator